The history of the territory
Historic settlement of this are dates back to the second half of 13th century. In this era, mining areas abundant in gold and silver were massively colonized and settled particularly by German settlers. Glaser Filius Gerhardi de Doplicze, guided many German colonizers to this area. They were mostly Saxons, invited to this settlement by King Belo IV., especially for their knowledge in extraction, mining and metallurgy. In the vicinity are located ruins of Šášova and Revište castles. However, the closest is ruin of Teplice castle (called also Red Castle, Deserted Castle of Teplica), which was also strategic place of Knights Templar. Abundant healing hot springs were used by the Templars for curing wounds from fights. This region was the battlefield of Jiskraś troops, troops of Polish King Kazimír IV. and also witnessed class uprisings, in particular Bočkai's uprising. Later on, territory experienced Turkish invasions of Murteza Pasha and invasions of troops of Pavel Bornemis. All these conquerors endeavoured to gain control over Royal free city, Banská Štiavnica itself, as well as over territory of the hills of Štiavnica, abundant in precious metals. Castles in this territory fulfilled not only important defensive, but also signalization function against conquering troops approaching this territory. This replica of medieval castle, built in place of ancient settlement from 19th century, is created for permanent remembrance of rich history, defensiveness of this region and bravery of people defending their territory against inroads. 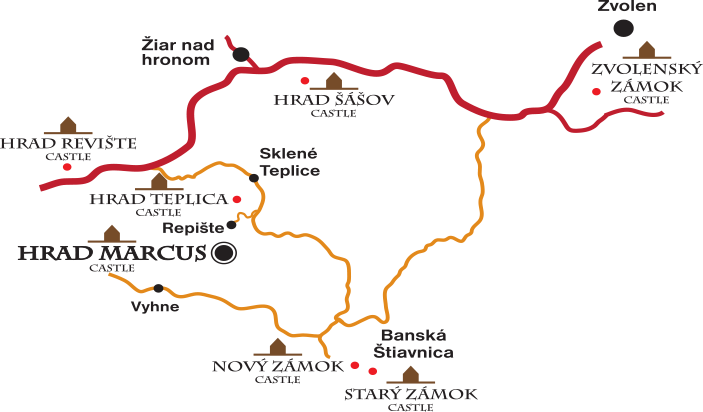 Idea
For the permanent remembrance of the rich history and defense of this territory, as well as the courage of the people who defended their territory against invasions, this replica of the medieval castle is built on the site of the old 19th century settlement.
In the lower part of the fencing there is the chapel Sv. Barbora and frieze are placed in ancient Christian symbols.
Gallery